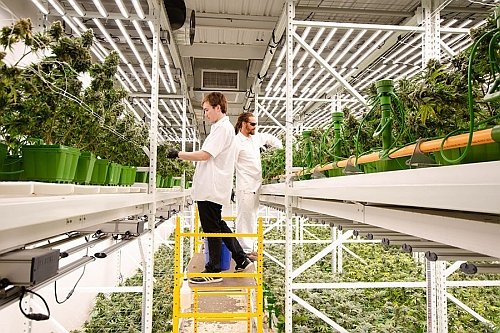 New broad-spectrum LED-based horticultural lighting by Fluence Bioengineering has enabled cannabis grower Eve Farms to both double its yield and improve crop quality.
The LED lighting, meanwhile, has also delivered increased biomass and faster crop cycles. Eve Farms found that cycles went from nine weeks to eight weeks, yielding the equivalent of 35 additional cultivation days per year. Between the larger canopy and improved plant production, the farm has improved yield from 100–125 lb per harvest to 200–250 lb. The energy efficiency of LEDs enabled the increased output with only a 5% increase in power consumption.
The SSL has also improved the chemical composition of the plants. Eve Farms found that secondary metabolite production of the prized cannabinoid and terpene levels increased by 11% — making the crop more valuable per pound. Both the metabolite production and faster cycles were attributed by Fluence to the spectral power distribution (SPD) of its fixture design. Fluence relies on a broad SPD with energy stretching from blue to near-infrared (IR), far red, and significant energy in the green, yellow, and orange regions.
Some prevailing thoughts on changing essential oils in plants through increasing secondary metabolites has been focused on the need for ultraviolet (UV) spectrum exposure to stress the plant. Indeed, at our Horticultural Lighting Conference 2017, we had several presentations that described that mechanism. But Fluence says the Eve Farms project is proof of its belief that a broad spectrum is actually the key to increasing secondary metabolites.
Eve Farms apparently agrees. “We view Fluence as a strategic partner which has enabled Eve Farms to surpass cultivation targets and reduce operational costs to help us maintain our competitive edge in the market,” said Matt Cantelo, CEO and founder of Eve Farms. “With Fluence, our cultivation team has the latest in agtech to reliably produce award-winning cannabis.”
bron: www.ledsmagazine.com 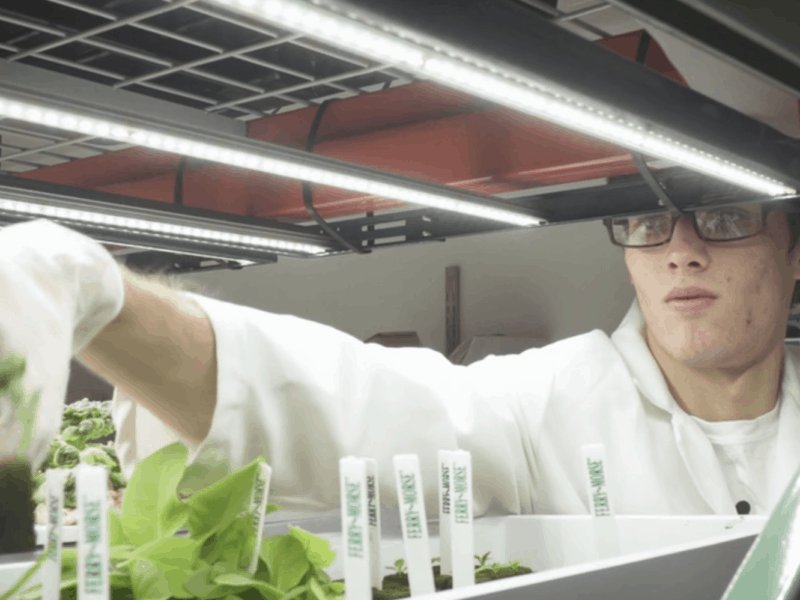 In recent years, vertical farming has gained traction as a sustainable method of producing food for a growing global population running short on arable land and natural resources. Climate change will not only displace people in communities where resources are growing limited, but will also affect plant species and their adaptation and resilience to temperature changes, water limitations, and pests. Plant Physiologist, Dr. Paul Gauthier and his students at Princeton University have launched several projects to investigate how to feed a growing population with vertical farming while also researching plant resilience under climate change threats.

When conducting research under LED grow lights, what particularly stood out to Dr. Gauthier was the incorporation of a broad spectrum in Fluence lighting solutions, which is essential for optimal secondary metabolite production. “We need extremely precise light intensity. We need to be able to increase or decrease light by as little as one micromole. We also need very precise spectra in the visible light range (400 – 700 nm). Many LEDs are either too rich in red or too rich in blue when plants need both red and blue in the right balance.” Low heat emission is also critical to his studies, “we need to make sure that the heat radiation reaching the leaf isn’t too great. Being able to control leaf temperature is challenging and limiting heat radiation is critical.” With Fluence LED systems, they were able to overcome these barriers compared to conventional light sources.
Their focus is getting the best harvest with the least amount of resource consumption, and by making the data publicly available, other researchers may be able to work towards cultivating food efficiently to feed a growing population. By deploying SPYDRx PLUS, the team saw significant improvements in energy efficiency, crop quality and yield. By cultivating in their vertical farm, resource consumption decreased and students were able to study multiple crops at once. There is no doubt farming practices are evolving just as quickly as our environment, yet many questions remain and the answers are being uncovered by studying something as small as the quantum of light.
Bron: Fluence.Science

Ledinside.com
Fluence Bioengineering today announced that its LED systems have been selected by MedMen, a leading cannabis firm, for its newly renovated cultivation facility in Los Angeles. The new, state-of-the-art vertical farm replaces a traditional single-tier cultivation facility, and enables MedMen to use fewer natural resources, increase overall revenue per square foot and reduce operating cost per pound.
“Being an industry leader, our goal is to stay out in front and push our company into the future,” said Damian Solomon, Director of Cultivation at MedMen. “With the Fluence LED systems, we see faster bloom cycles and a significant increase in potency, density and overall quality of flower compared to traditional HID lights. It’s clear Fluence is a perfect partner to deliver the tools and technology to help us achieve our goals.”
The new facility is optimized to increase revenue per square foot, with all phases of plant cultivation — from propagation to bloom — growing under Fluence LED lighting systems. By transforming the growing facility from a single-tier traditional indoor farm using high pressure sodium (HPS) lights into a multi-tier vertical farm with Fluence LED lights, MedMen has:
“MedMen is a shining example of how the cannabis industry will evolve to embrace more ecologically friendly cultivation practices to better serve patients, consumers, the environment and financial stakeholders,” said Jerry Kieran, Chief Business Development Officer at Fluence. “We’re excited to partner with MedMen as they help pave the way for North America’s commercial cannabis-cultivation industry.”
Bron: Ledinside.com